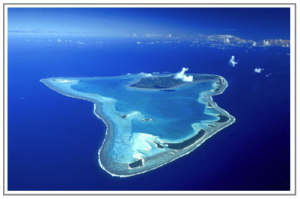 I have a clear visual dropping down over Kris silently, head down, fins up, gyrating through the vast body of blue light in a cool calculated descent, until facing the hapless officer upside down and presenting her with the instrument of her elimination, while still below us, the great reef wall reaches off into the twilight of visibility and down into the crushing depths.

It’s January 1998. We’re camped at Calabash cay, a remote marine research station on the eastern rim of Turneffe atoll, 51km off the coast of Belize – a group of biologically divers sand and mangrove islands and cays, lagoons, lush seagrass beds, all surrounded and protected by a living coral reef ring. An exquisite and complex jewel of life in the middle of the Caribbean. Your archetypal desert island… Pristine, palm lined, sandy bays, lapping turquoise waters. Uninhabited, as yet unspoilt, and there are about a dozen of us paying “volunteers” camped under the decks of the elevated field operations structures. We’re trained to collect data along standard transects to assess reef habitat types. This means going out to GPS located dive sites in teams of four, descending to the bottom and surveying the specified length and compass baring – one person leading the dive as navigator (D1) one recording the frequency and species of fish (D2) one coral (D3) and the fourth algae (D4). On each subsequent dive, our positions are rotated, two dives a day, a maintenance shift and recreational dives on Saturday. Also, on the weekends – we party – hard!

After the first week of intense training and dive activity, I’m picking up the rhythm, feeling elated – bronzed, fitter and stronger day by day. Once the excruciatingly tacky and patronising PADI part of the training is over, the diving gets better and better. Sitting on the edge of the boat, “buddy” checks (like, hello, have you got your air turned on?) backs to the water, holding mask and regulator to face, fins crossed, on the count of 3, roll back, splash, breath, OK signal to captain, check group, hand signal OK to dive, down we go, into the other world. Breath. Slow motion. Silence.

I become adept at buoyancy control, able to hover at close proximity, inverted deep in some complex coral garden without impacting my environment. I begin to feel at home in this fleeting dreamlike world. Of all the extra-ordinary creatures and landscapes here, it’s the Spotted Eagle Ray that fills me most with awe and reverence. The magnificent, slow, undulating motion of their wings, propelling them through the deep blue is nothing less than numinous. Only in powering after a pair of these regal giants for a closer look, am I struck by how inept I really am in this environment. They vanish effortlessly into the horizon of visibility with a few great wing beats. Their power and grace re-calibrates my sense of the mystery and miracle of creation.
Gazing up whilst at a 5 meter decompression safety stop, the rays of the sun emanate down from the water’s shimmering surface in bands of silver-blue crepuscular light as we hang there, a pod of effervescent humans, suspended in time and space. The boat captain will have spotted the first of several teams approaching the surface by the colony of rising bubbles and idle over to the zone to wait – an ideal time for an already boarded team, to jump off the boat and moon unsuspecting, suspended divers. This is of course recorded in our log books as the rare sighting of a school of moonfish. If you’ve ever been caused to laugh out loud under water, you’ll know it doesn’t work so well.

it’s 7.30 and the mornings work is done. got an hour to chill today before my 1st dive, which being a sat. is a recreational dive. owning a computer means i get to do a comp. dive to 30m with the elite – including the science officer, whom i am tasked to murder! The stipulations being that the murder must be committed on a rec. dive, with a tampon in a zip-lock bag. I’ve been waiting a week for the opportunity, whilst all those about me drop like flies and i don’t know when it’ll be me.

have a clear visual dropping down over Kris silently, head down, fins up, gyrating through the vast body of blue light in a cool calculated descent until facing the hapless officer upside down, and presenting her with the instrument of her elimination, while still below us, the great reef wall reaches off into the twilight of visibility and down into the crushing depths.

2/16/98 (pm) / Dive 27 / Site “Slashing Sharks” / D1 – Navigation Depth 12m / Time 37 mins. Found abandoned cage trap, drew knife to cut door open and out swam a considerable number of fish – including a large Grey Angel who swam up to my mask to thank me it seemed, before taking off.

I don’t know who names these dive sites but suspect Kris the marine biologist “Science Officer” who is the most quirky and kinky I suspect, as she powers us out to our dive sites rocking the helm in her slinky underwear.

The evenings are spent barbecuing on the placid backwater lagoon, swimming under the tropical moonlight, catching up on reading or more often just crashing from exhaustion. But did I mention the weekend parties? Most of the kids coming out here are in their late teens, taking a break before going into university and are letting loose. The rum flows and nobody is shy. Theme parties bring out the creativity of limited costume resources from the jungle, everyone rising to the challenge. And as the evenings wear on, the palm fronds fray. Musical sexual positions in the Caban?a and spin the bottle on the pier get pretty wild with forfeits like licking spines, drinking rum out of belly buttons and (ahem) licking the full length of the Science Officer’s inner thigh.

After the first month I secure an extended stay, taking on the title of “Equipments Officer”, partly due to a little finesse in my handy man skills and partly due to the “Expedition Leader” Russell’s need for a compan?ero – we are sympathetic to each others causes. So as he heads out to the mainland with the whole of the last month’s teen posse, sailing off on The Witch, out of site over calm waters, Kris, Vicki and I sit down here on the pier and sigh great sighs of relief. This is the first day in my time here, most probably the last before the next crew come in, that there is time for reflection, time to listen to the birds and watch the surf, the sunlight through the palm leaves. In the silence, all the beasts crawl into camp from the jungle.

My log book entry gives the official maximum allowed depth of 30m. Most of the dives are boat dives, but Vicki & I swim out to the reef “drop-off” and down to a cool 44.2m, round an escarpment where very large Black and Nassau Groupers are nonchalantly cruising beneath over hanging coral shelves. The sensation at this depth is quite extraordinary. Equanimity, sudden calmness and ease of breath fall in as we drift through the deep blue. The magnificent reef wall continues to drop away steeply beneath us as I get a taste of the “Martini effect” – nitrogen narcosis, also known as Rapture of the Deep. I feel Vicki keeping an eye on me, being the more experienced diver, as the temptation to sink deeper into the delicious abyss, two Martini depth, could be trouble.

Vicki is the Medical Officer, a Dive Master like the rest of the expedition crew, and my lover during my sojourn at Calabash Cay. I feel comfortable under her wing, and pushing the boundaries, we have a number of little adventures for which I am grateful, cruising the beautiful coral landscapes and curious creatures, green morays, honeycomb cowfish, nurse shark, exploring the marvellous crests and shelves and coral plates reaching out from the wall at Aladin’s Cave, or Hot Rocks or Great Balls of Fire, buddy breathing till the last of our air is up.

My last dive on Calabash. Vicki has me remove my scuba pack in the deep, place it on the sea bed, take a hit of air from the regulator and swim around free, come back for another breath, playing around until we hear the air horn submerged into the water from the boat 30m above – storm coming, sea state getting rough, time to abort dive and head home. By the time we get to the surface there’s a dramatic sky, significant swell, and a tangible excitement un-felt in the calm below – everyone is reeled in and we are shore bound.

Morning. Full moon sets. Pack my kit. Time to leave Calabash. A full turn out on the pier sees me off. I reflect that whenever I have found myself working and playing hard, outside of the gravitas and regulation of society, with intellectually curious travelers, adventurers, students, poets, seekers, escapees from the status quo, I am struck by the playfulness, honesty and enigmatic beauty of human beings everywhere. Farewell beautiful people.

A launch whips me back to the mainland, on to Belize City – a new journey begins – into the jungles of Belize and Guatemala. Hello beautiful people.