I had forgotten how completely and utterly fucking nuts India is. It’s so scuzzy and chaotic you still can’t believe it. But vibrant, colourful and exotic like nowhere else. Hop on your moped and into the foray and it’s adrenalin carnival all the way…

You know you’re in India when overtaken by young mums deftly accelerating, breaking and navigating chaos with right hand, chatting on phone with left, little girl standing up front, old mum seated behind, side-saddle in floating sari, all weaving in and out between aimlessly wandering cows, families of 5, towering house sized bushels of rice straw – fully loaded moped stacks of daily life on the fly.

We did a house exchange with a lovely couple of literary Anglophiles who live in Delhi, but have an apartment in Goa, so the blessing of free digs, cush pad with pool and mod cons just on the edge of Candolim.

Candolim, we discovered however, has become a Mecca for retirees winging in direct from Birmingham and the North on erstwhile Thomas Cook package deals. The beach road is therefore brimming with Brummies with a penchant for booze, bingo, karaoke and quiz nights, and every corner is touting their song loud and proud with fat crooning Indian cover artists and Mancunian compéres. Its a little surreal. Goa has definitely passed it’s use-by-date as a laid back retreat destination, but you still gotta love the all embracing disarray of this country. 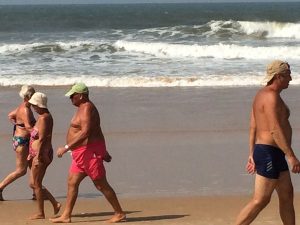 And no complaining about endless beaches on a balmy ocean, sunshine in the high 30s and seriously good Goan grub all day everywhere for pennies – even if surrounded by obscenely bronzed sagging old folk – and the middle class has risen a new breed of Indian and Russian tourism to complement the Thomas Cook crew. Costa Del Sol ain’t got nuthin’. According to the locals I chatted with – the Ruskies are never happy and seriously tight fisted – I even heard veggie market stall holders fighting hard in fluent Russion just to get a fair price for his mangoes. But I digress…

Up North from Anjuna to Arambol where the hipsters roll, no less of a throng of young blood Israeli’s banging their drums louder’n any native, and blond waifs all strutting about midst the ancient toothless hardcore hippies and trippers and tattooed yogis young and old. Quite a scene. Not to mention the best fish thali this side of the sun (at Eyes of Buddha on Arambol beach) – incendiary flavours and spices. Nothing will ever be the same again. LSD no longer required. 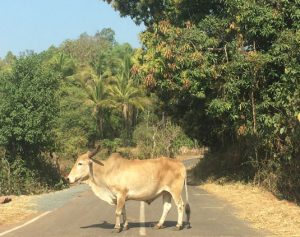 So, after experimenting on an accelerated path to the next life via moped on these roads, we rented a car (with no papers) and headed South – and still, like entering into any turbulent stream of life, driving in India requires relinquishing any sense of control and riding the jet-stream wherever it takes you. There are no rules or regulations (though they exist in theory). Only a kind of miraculously semi-functional chaos – you just get in the flow of the vortex and go. Minor and major junctions are absolute lawless disorder requiring a native state of mind to negotiate successfully. i.e. an unwavering opportunistic intention to keep moving in the direction you think you want to be travelling, breaking or accelerating according to the closing or parting of the surging wave of mopeds bearing families of 5, or riders plus 6’ fish (shame I didn’t get that shot), belching wonky diesel wagons overflowing with gangling field workers, or just about anything else you can or can’t imagine coming at you head on, sideways or backwards, big-ass horned buffalo wondering about randomly in the middle around which everything else flows (they are the ones in fact, who rule the road) – and everything just keeps flowing somehow. Bit like a butterfly hits a buffering airstream last minute and gracefully glides over the bonnet of your car and away into the sunlight – sort of like that, but with infinitely more noise. Thus (via police trap trawling for bribes) there is a frenzied flow into which one enters in order to get from Z to Q, where you arrive miraculously, suddenly squeezed out into a calm backwater, drifting along quietly on your way, breathing fragrant cashew flowers on the air instead of rotting rubbish, shit and diesel grit. 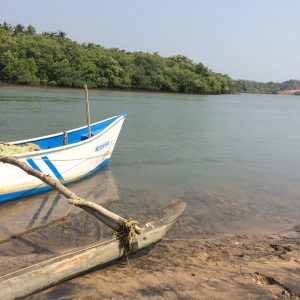 Still a bit more laid back in the South then, less developed, but saturation of all the worlds quiet spots seems inevitable. Palolim offers a most idyllic beach, yet the palm lined edges of the bay are now packed end to end with huts and restaurants offering burgers or shakshuka and is the alternative blonde waif and Israeli drum bashing grounds of the South. Agonda remains pleasant, vibrant waters in a larger bay, a little lower key, and relatively civilised (my own subjective terms.)

There are still a handful of protected turtle breeding grounds and more or less deserted clean beaches towards the border of Karnataka.

The jungly National Parks and backwaters are definitely the best bet if you want to escape every wanker, hustler and hawker under the sun. Otherwise – forgeddaboudit! 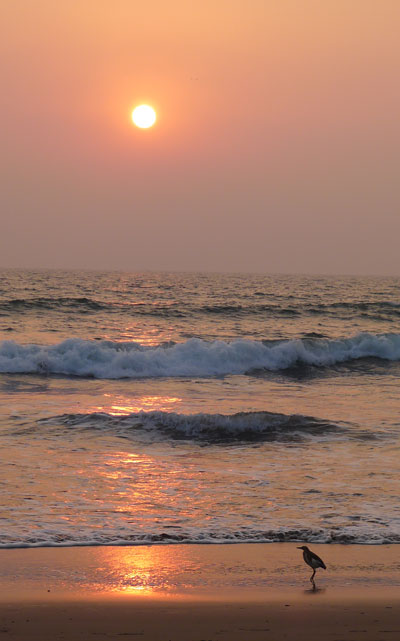 Meanwhile, back in Candolim, braving the Brummies (yes, alright, I am a snob) the GF is getting dark as a native, and I’m working on a shade of pine (thanks to the Nors blood.) We were graced by several pods of dolphin early this morning, way out off of Candolim beach. And there is a kingfisher perched on a branch of the mango tree outside my window here. We’ve been hanging out together and it feels nice knowing that he’s comfortably perched there at night. So, you know, loving every moment of it all, getting fit (self practice, swimming everyday) and forever grateful, but probably won’t be back to this corner of the world again  soon, so long as there are others yet unexplored or unexploited to the max.