Posted on August 6, 2016 by Nik
Comments Off on 2 minute readAutobiography of Eve

an ode to sex, desire, rebellion and fallen women 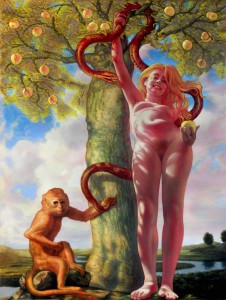 Found this artwork in centre camp at burning man a few years ago (tracked down the artist through the playa vine for attribution) then stumbled across this poem and thought… they belong together!

Autobiography of Eve
by Ansel Elkins

Wearing nothing but snakeskin
boots, I blazed a footpath, the first
radical road out of that old kingdom
toward a new unknown.
When I came to those great flaming gates
of burning gold,
I stood alone in terror at the threshold
between Paradise and Earth…
There I heard a mysterious echo:
my own voice
singing to me from across the forbidden
side. I shook awake—
at once alive in a blaze of green fire.

Let it be known: I did not fall from grace.

I leapt
to freedom.

From the artist Scott Siedman
“Here is Eve, the serpent raised above her, in her right hand, not gripped in fear but caressed in joy. This Eve is at ease with her powers, her connection to all living beings and playfully rebellious in the face of Jehovah and his cruel dictates. She holds the apple lightly against her naked hip, “Take it… or leave it,” she smiles. Besides her is our forebear, cousin and eternal male jerkoff, one hand on his tool while the other grips the serpent. This is Adam, willing playmate and little more than carrier of the seed. Here is a just world, free of good and evil, and free of shame, a garden worthy of the name Paradise, lost only if we chose to obey an unworthy god. She is our champion… triumphant!”

“While following the trial of the band Pussy Riot, [summer 2012] reading the plays of Mae West, and watching pre-Code movies filled with unrepressed seductresses like Marlene Dietrich and Clara Bow, I began writing ‘Autobiography of Eve,’ an ode to sex, desire, rebellion, and so-called fallen women. But the poem, draft after draft, eluded me until last July when, as I worked on it feverishly in a New York hotel, it occurred to me that the moment I was writing toward was not Mae West’s, it was Eve’s. I dismantled the poem and recast the lines dozens of different ways, playing with varieties of syntax and sound in an effort to locate the pulse of this pivotal moment between good girl and bad girl—a moment like Eve’s soliloquy in Book 9 of Paradise Lost as she stands before the tree of knowledge and speaks the word freedom for the first time—the moment where desire becomes transgression. I realized that Eve’s radical act of rebellion lay in her imagination, a fantasy of herself.”